The Jewish Community Relations Council (JCRC) continues to make progress on its mission to serve as a voice responding to issues affecting the Valley’s Jewish community.

After recently being incorporated as its own 501(c)(3), the JCRC received funds held on its behalf by the Greater Phoenix Board of Rabbis.

Guided by the Board of Rabbis, and with financial support from the Jewish Community Foundation of Greater Phoenix (JCF), the JCRC was established to provide a collective voice for the Valley’s Jewish community with a focus on interfaith relations, building ties with elected officials and other relevant public affairs issues. The JCRC fills the void left behind when the Jewish Community Relations Committee ceased operations in 2008.

The JCRC has received three grants from the Foundation since 2015, totaling roughly $124,000.

“We are grateful to the Board of Rabbis and the JCF for their efforts, support and assistance in creating this vitally important organization,” said Alan C. Jablin, founding president of the JCRC board.

In 2015, the Board of Rabbis hired two consultants — Sandra Price and Rhonda Bannard — to help lead an initial group of volunteers tasked with advancing the initiative. They also helped begin the search for the JCRC’s first executive director.

“The Jewish people have a long history of building community relations, from Yosef in Egypt and Esther in Persia until today. Having a strong community relations council is essential to the health and well-being of our Jewish community,” Benger said. “Building relationships takes time and it is critical that our Jewish community builds bridges with our friends and allies of diverse faiths, races and ethnicities for the purposes of security, peace and improvement of our society.”

While much of the JCRC’s work takes place behind the scenes, Benger explained, the council has a number of public events scheduled for the next few months. In conjunction with the Bureau of Jewish Education and the Arizona Jewish Historical Society (AZJHS), the JCRC will host a screening of “Strange Fruit,” a documentary exploring relations between the African-American and Jewish communities by looking at the history and legacy of the eponymous poem. The poem, which is about the lynching of African-Americans in the Jim Crow South, was written and set to music by Abel Meeropol, an American Jewish songwriter and poet. The song was popularized by jazz singer Billie Holiday.

This spring, in conjunction with the Arizona Faith Network and the East Valley JCC, the JCRC will host an event called Judaism 101 at the East Valley JCC. It is meant to introduce non-Jews to some of the basic aspects of Judaism.

In April, the JCRC will hold an interfaith concert featuring performances from choirs of diverse faiths from around the Valley. The concert will be held at the Arizona Jewish Historical Society.

Rabbi Bonnie Sharfman, head rabbi for Congregation Kehillah, serves as secretary of the Board of Rabbis and was the project liaison to the JCRC. Sharfman said she was thrilled to see the successful launch of the now fully independent JCRC, adding that the ceremony marked “a real shehecheyanu moment for our community.”

“We are very excited to be transferring the mantle at the start of Chanukah, the festival of lights,” Sharfman said. “Chanukah as a word means dedication, and I know that this shows the incredible dedication of the Board of Rabbis to filling needed gaps in the community, the support of the Jewish Community Foundation, without whom this would not have happened, and the dedication of the founding leadership of the Jewish Community Relations Council.” JN 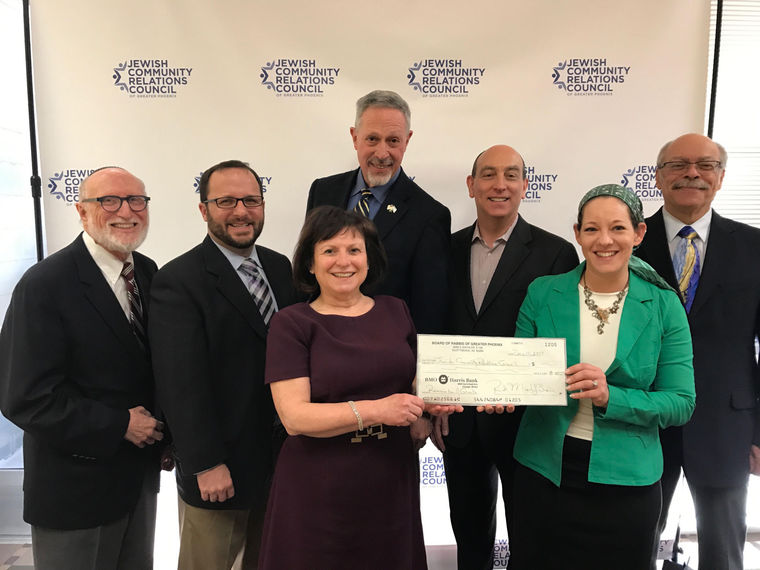