Given the occasion, it is worth remembering the role of Shanghai as a city of refuge for Jews. The Shanghai Jewish community has a long and storied history, beginning with the immigration of Sephardic Jews from the Middle East in the mid-19th century. Iraqi Jewish families like the Sassoons and the Kadoories amassed fortunes and built business empires as Shanghai began its meteoric rise.

At the turn of the century, Ashkenazi Jews began flooding Shanghai from Russia. Three waves of Russian Jewish immigration followed periods of rising anti-Semitism in Russia: the first in 1904, followed the Russo-Japanese war, the second occurred in 1906 with the outbreak of pogroms, and finally in 1917, the third wave came as a result of the Russian civil war. 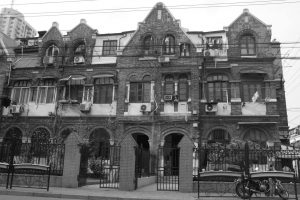 flux of Ashkenazi Jews to the Hongkou neighborhood, the area was nicknamed “Little Vienna.” The area teemed with Jewish-owned shops and kosher delicatessens. Numerous synagogues were built, including the Ohel Moishe synagogue that still exists today as a small museum for Shanghai’s Jewish past.

In the lead-up to World War II, Shanghai became a refuge for many Jews fleeing Europe. When doors were closing to the European Jewish refugees, Shanghai¹s colonial status as a free port allowed it to welcome the displaced Jews. Shanghai was one of the few remaining places that did not require papers or a visa for entry. From 1939 to 1941, between 20,000 and 30,000 Jews immigrated to Shanghai to escape Nazi persecution.

With the coming of the Japanese occupation of Shanghai, the Japanese authorities designated the Jewish as “stateless refugees”and confined their residence and businesses to a somewhat benign ghetto in the Hongkou neighborhood. The ghetto was wall-less but guarded. Meanwhile, the already established Shanghai Jewish community was able to move freely throughout the city to provide provisions for the refugees. The American Jewish Joint Distribution Committee, an organization that aided the refugees in many parts of the world, aided the Jewish refugees in Shanghai as well.

With the end of World War II, and the instability in China in the post-war years, almost all of the Shanghai Jewish community immigrated to America, Canada, Australia and Israel. Traces of the community can still be found in the Hongkou neighborhood, with its European-style tenement houses. In the back alleys of Hongkou, traces of the Jewish community can be found in the form of a door grill shaped like a Magen David and nail holes where mezuzot used to hang. In the heart of the neighborhood is the Huoshan Park; there is a small memorial, written in Chinese, English and Hebrew, to the “stateless refugees” who found haven in Shanghai.