On Sunday September 8, the JCRC, Arizona Faith Network and ACLU hosted a Smart Justice Cafe for the Jewish community to address the situation of criminal justice reform in Arizona. 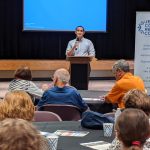 egan with JCRC Exec Dir Paul Rockower sharing Dostoevsky’s famous remark: “The degree of civilization in a society can be judged by entering its prisons.” 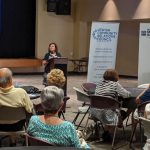 It continued with a powerful theological framing of criminal justice reform in a Jewish lens by Rabbi Bonnie Sharfman of Congregation Kehillah, whom sits on the JCRC and AFN Executive Committees. 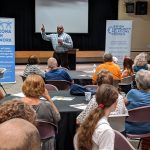 The program continued with Carmen sharing her story of her family being impacted by the criminal justice system, and subsequent table discussions.

Then Nicole shared her story of how her life was impacted by the criminal justice system, followed by table discussions on the meanings of restorative justice.

The program continued with JCRC ExecDir Rockower reading a letter from a Jewish prisoner presently incarcerated and sharing his story.

The program concluded with a call to action and discussion of the toolbox of engagement.

We would like to thank all those who came out to make it such poignant program and meaningful discussion on criminal justice reform.

We would also like to thank all our partners on the program at Congregation Kehillah, The New Shul, Temple Chai, Temple Solel, Temple Emanuel, Temple Kol Ami, Arizona Jews for Justice and National Council for Jewish Women. 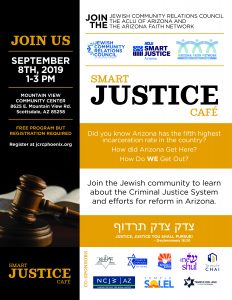