Glendale Proclamation for tolerance and inclusivity 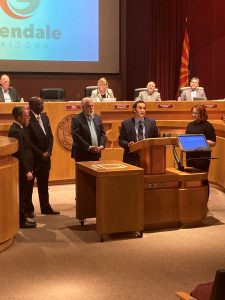 After vile, hateful flyers were left in Glendale and other cities in the West Valley, the JCRC was proud to lead a coalition of community partners to push back against hate.
We are grateful for our partners at Arizona Faith Network, CAIR-Arizona, Chicanos Por La Causa – CPLC, ONE Community and Maricopa County Branch NAACP for joining us in a joint letter to mun
icipal leaders to stand against this hate.
We are further grateful for the leadership of Mayor Jerry Weiers and the Glendale City Council for issuing a proclamation for tolerance and inclusivity, and against hate, for the City of Glendale at last night’s City Council meeting.
As we enter Yom Kippur, we honor this victory in the fight against hate, and pray that the year to come will be marked with tolerance, inclusivity and peace.
Read the AZ Republic article on the Glendale Proclamation here 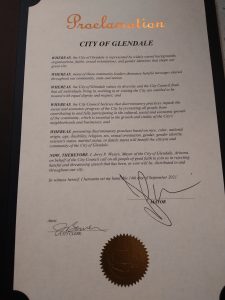